On May 29, the International Finance Corporation (IFC) and the state-owned China International Trust and Investment Corporation’s subsidiary CITIC Construction launched CITICC (Africa) Holding Limited, a $300 million investment platform to develop 30,000 African homes over the next five years. Projects would begin in Nigeria, Rwanda, and Kenya and expand throughout the continent.

The deal addresses a crucial regional gap in housing finance. Kenya is short 2 million housing units, Nigeria a whopping 17 million units, and these numbers are set to grow. According to the World Bank Group, three billion people, or 40 percent of the world’s population, will need new homes in the next 15 years, most of them in Africa. The United Nations Human Settlements Program (UN Habitat) states that the African continent is experiencing the highest rate of urbanization in the world, with approximately 40,000 people migrating to cities every day. 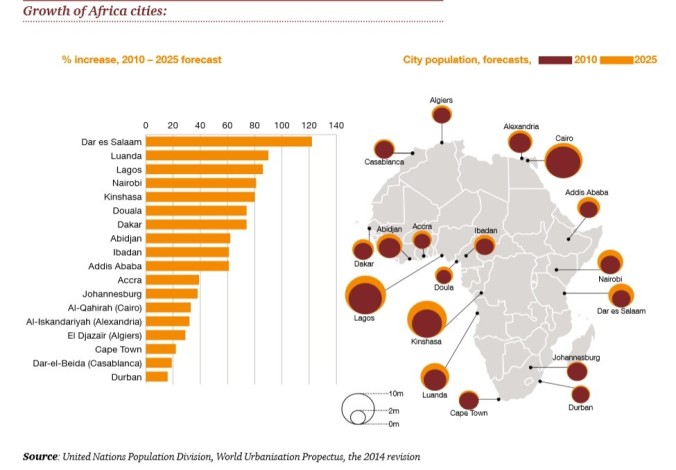 The graphic illustrates the scope of population growth in major cities across Africa. Source: Niti Bhan

A number of African cities already face housing shortages, with notorious informal settlements such as the massive Kibera slum outside Nairobi, Kenya, home to almost 1 million people. UN Habitat reports that in some countries, including Nigeria, Sudan, and the DRC, over half of urban populations live in slums.

With ever burgeoning populations contributing to existing problems of homelessness, unemployment, and deficient energy, healthcare, and education, African cities face an imminent crisis. The 30,000 new homes planned by the IFC and CITIC are an important contribution, even if merely a drop in the bucket – but will they be affordable for Africa’s urban poor?

CITIC Construction was selected by the IFC due to its recent completion of a $4.2 billion contract in Angola. There, 18 miles outside the capital Luanda, CITIC built 200,000 units in 710 residential buildings, in addition to 41 schools and kindergartens, 246 shops, a power substation, water purifying and sewage treatment plants, and roads and traffic lights, all in 54 months. Yet the newly constructed city of Kilamba is a veritable ghost town, with the majority of the apartments still unsold. At $120,000 to $200,000, the price of the apartments is prohibitive for the majority of Angolans, who live on less than $2 per day and lack access to bank credit and mortgages.

However, the blame for such an ill planned project should not rest on the Chinese contractor. African governments such as Angola’s need to build infrastructure that their populations need now, including affordable housing for the urban poor. They need to ground their socioeconomic policies and development plans firmly in reality and serve the interests of local populations – not wealthy expatriates that live in the same cities but worlds apart.

The United States for its part has a role to play in providing technical assistance and financing to help address the issue of affordable urban housing in the developing world.  Power Africa is a great example of the kind of leadership that the U.S. can provide, investing in renewable energy to simultaneously bring needed electricity to rural Africa, and presents opportunities for American companies to invest in and develop new technologies.  The State Department, USAID, and the MCC can play an effective role in developing plans that meet the current needs of African cities, including houses that are truly affordable for the poor.

Ariel Gandolfo is a researcher with the Project on U.S. Leadership in Development.