In the past five years, the Kingdom of Morocco has been the most rapidly transforming economy in the unstable North African region—and arguably even in the world. Morocco has made an incredible leap in the World Bank’s 2015 Doing Business index, ranking 71 out of 189 economies compared to 130 in 2009. This dramatic improvement attracted the attention of the private sector, drawing even more foreign cash into the kingdom. In 2014, Morocco became the second-largest destination for FDI in North Africa and the third-largest recipient of FDI on the African continent. This year, Morocco continues to win foreign investors’ attention.

Last month, French aircraft company Figeac Aéro announced plans to invest $29 million to open a production plant in Morocco, generating 500 direct jobs. The French automaker PSA Peugeot Citroen will invest $632 million in a low-cost vehicle assembly factory, with production scheduled to start in 2019. This is estimated to create 4,500 direct jobs and 20,000 indirect jobs by the time the factory is operational. Additionally, Japanese company Furukawa Electric, the world’s third-largest fiber-optics manufacturer, is poised to invest $8 million to build a Moroccan plant and tap into the growing demand for communications infrastructure in Africa. Not only do these private investments create jobs, they also boost exports of vehicular, aeronautic, and electronic equipment. 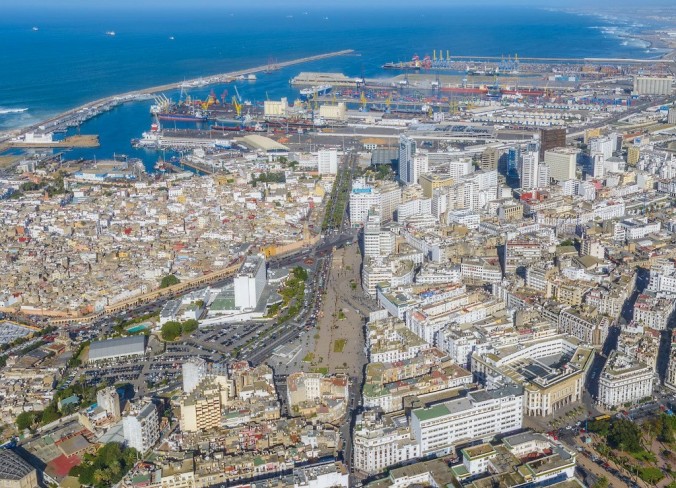 Casablanca is an important trade and financial hub for both Morocco and the African continent.

From the view of investors, several key factors underlie Morocco’s increased ability to attract FDI. First, its geographical location between the EU – the world’s largest economic entity – and Sub Saharan Africa – the world’s most rapidly growing region – positions Morocco as a strategic trading hub. Morocco also has reliable infrastructure in ports, public transport, and telecommunication networks, which facilitates trade. The next key factor is Morocco’s regulatory policies, including its privatization policy and tax-exempt free trade agreements with 55 countries (including the EU, U.S., Turkey, and several Arab nations). These policies help to secure investor confidence and attract foreign investment into non-agricultural sectors, such as textiles and aeronautics. Finally, under King Mohammed VI’s business-friendly orientation, the kingdom has implemented consistent economic development strategies over the past decade. As a result, Morocco is home to a stable political and business environment, especially compared to the persistent political and social tensions that disturb economic opportunities in other North African countries.

However, Morocco’s economy is less stable than it may first seem. One major challenge is high unemployment—9.9 percent in the first three months of 2015. Youth unemployment is even higher: Four out of five unemployed are between 15 and 34 years old. Another issue is Morocco’s dependence on the EU, its main source of FDI, tourism, and remittances. The EU accounts for about 53.6 percent of Morocco’s total trade, and economic downturn in the EU’s economy would have immediate and far-reaching effects on the Moroccan economy, driving unemployment even higher.

To build a more stable and resilient economy, Morocco must, as a middle-term goal, strengthen ties with more Arab and Asian countries to diversify its trade portfolio. For an immediate-term strategy, the country could create industrial clusters for aeronautics, automotive, IT, and electronics manufacturing. This is key to making foreign investments more effective at the micro and macro levels by enhancing interactions between research centers and firms. As seen in emerging high-tech clusters of Bangalore in India or Hsinchu in Taiwan, business clusters can stimulate ecosystems of innovation and economic development. Through more effective alignment of logistics infrastructure (i.e. transportation and communication networks), the Moroccan government can assist the private sector in knowing where to invest and concentrate human resources and skilled labor. In turn, Morocco will enhance its ability to attract higher quality FDI.

Equally important, Morocco can better take advantage of its current FDI inflows by improving economic and social conditions for its large population of unemployed youth. With its growing number of free trade agreements and a ready workforce, Morocco may witness further economic transformation in the next decade—if it can prepare its youth to harness these opportunities.

Motoki Aoki is a researcher with the Project on US Leadership in Development.