The United States’ multi-billion dollar War on Drugs in Afghanistan and Colombia has failed. Afghanistan supplies 80 percent of the world’s opium, which is derived from poppies and used to make heroin, while Colombia is home to around 43 percent of the global coca supply. Despite continued efforts to crack down on the production of heroin and cocaine in these countries, poppy cultivation in Afghanistan rose 36 percent between 2012 and 2013, to record levels. In Colombia, approximately 2.6 million acres of coca were sprayed with toxins between 2000 and 2007, yet cocaine production rose during the same period, and more recently increased by 44 percent between 2013 and 2014. 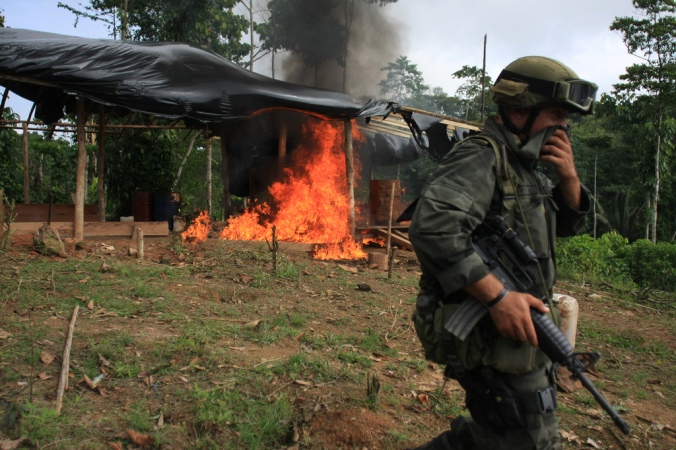 In Colombia and Afghanistan, farmers grow coca and poppies because they are profitable, but also because there are no viable alternatives to earn a living. Governments are now realizing that criminalization and eradication programs are not enough, and they are changing strategies to foster alternative opportunities to drug cultivation. These new approaches are supported by multilateral and bilateral organizations such as the UN Office on Drugs and Crime and USAID.

Despite those positive trends, several problems remain. First, funding for illicit crop eradication dwarfs support for alternative livelihoods. The U.S.-backed Plan Colombia has spent at least $1 billion on coca crop fumigation since 2000, but only allocated $42.5 million of the original $869 million to alternative development. Second, many alternative development schemes have proven unsustainable. USAID’s cash-for-work projects, for example, have generated thousands of jobs in Afghanistan cleaning canals or building roads, but these collapse as soon as the money runs out; they do not offer stable, long-term sources of income.

Finally, attempts to substitute coca or poppy for other commodities have failed due to a lack of financial services, poor infrastructure, low profitability or price fluctuations of legal crops, and the uncertainty of finding buyers. Colombia has attempted to replace coca with cocoa before, but a declining global demand for chocolate presented a hitch in the plan. In Afghanistan, free wheat seeds were distributed first in the Helmand province and then nationally in 2009 and 2010, but wheat production was not profitable enough as a replacement crop.

The U.S. can have the greatest impact on the War on Drugs in Colombia and Afghanistan by addressing these three failures and implementing comprehensive alternative development programs that tackle the structural issues of the Colombian and Afghan agricultural and export sectors. Working with national governments, USAID, the U.S. Trade and Development Agency (USTDA), and the Overseas Private Investment Corporation (OPIC) can help to provide the right mix of start-up investment funds and seed banks, tax breaks, and microcredit to incentivize Colombian and Afghan farmers to substitute drugs for the right alternative crops.

These multilateral partnerships must also focus on local transport infrastructure, capacity building, and appropriate quality control regulations, so that products reach their markets. In addition to facilitating the sale of alternative crops in domestic markets, U.S. agencies can help Colombia and Afghanistan boost their exports. Of fourteen OPIC projects taking place in Colombia, only one helps enterprises finance agricultural exports. Matching exports with stable international markets is also crucial, and the reason Colombia and Afghanistan should strengthen their commercial ties with China, Saudi Arabia, and other net food importers to guarantee a demand for agricultural exports.

U.S. trade agreements with Colombia and Afghanistan could also do more. Currently, the U.S.–Colombia trade agreement is too unilateral, facilitating U.S. food exports to Colombia rather than the other way around. In Afghanistan, grapes, spices, and other food commodities already make up a significant portion of exports, but markets are limited to Pakistan and India. Preferable terms of trade, like the boost given to eligible African nations under the African Growth and Opportunity Act (AGOA), will incentivize Colombian and Afghan farmers to substitute drug cultivation for legal crops they can export to the U.S.

In both countries, identifying the right products for export to the U.S. and other large markets is the first step. Next, U.S. agencies should assist growers in improving efficiency and meeting international quality standards. This will help farmers create alternatives to drug cultivation that are both profitable and sustainable.

However, while these alternative development strategies are crucial, a comprehensive approach to illicit drugs will include demand-side interventions as well as the supply-side crop substitution and trade programs outlined above.

The United States is one of the largest markets for cocaine and heroin, along with Europe. In order to cut down on the demand that fuels the drug trade in the first place, policymakers should consider the drug problem as a public health issue instead of solely a criminal one. This involves expanding treatment availability for users and addicts, and preventing drug use through early intervention and health education. Indeed, there is growing consensus for the public health approach worldwide, as seen by the UN Global Commission on Drug Policy recommendations.

The Colombian and Afghan governments can reduce domestic demand by applying the public health lens as well. About 20 percent of the cocaine produced in Colombia is consumed in country, yet access to treatment and other health services related to drug use is very limited: Only 25 out of 32 Colombian states offered treatment services in 2013, and most facilities were private and urban. For Colombia to reduce its domestic demand for cocaine and other illicit drugs, a larger public health budget is needed, particularly in rural areas.

Recent trends in this direction are promising. Initiatives like Colombia’s National Dialogue for the Future of Drug Policy, convened for the first time in August of 2014, and the Colombia-led forum on “Strengthening the Public Health Approach” to the drug problem at the UN World Health Assembly in May 2015, are clear examples.

Regarding Afghanistan, the 2014 UN Office on Drugs and Crime report estimates that 5.3 percent of adults in urban areas are opiate users, one of the highest rates in the world. This is a public health disaster, yet with an estimated 1.3 to 1.6 million illicit drug users, the current treatment capacity of 30,000 beds falls drastically short of the national need. In 2009, only 50 drug treatment centers operated throughout the country and serviced less than 3 percent of drug users. The latest Drug Demand Reduction effort, an initiative of the Afghan Ministry of Counter Narcotics, aims to expand treatment for drug addicts by 100 percent in four provinces.

World governments are slowly coming around to the conclusion that the drug problem requires a multifaceted solution. On the demand-side, public health interventions are necessary to curtail substance abuse in the long run. Sharing strategies to expand treatment for drug addicts, integrate services into primary healthcare, and thereby cut down on demand are great ways for the United States, Colombia, and Afghanistan to collaborate. On the supply-side, U.S. agencies can leverage trade incentives and provide critical support to Colombian and Afghan governments as they help farmers transition from drug production to sustainable, alternative livelihoods. Taken together, these efforts will result in a more effective and less costly War on Drugs.

Ariel Gandolfo and Miguel Eusse are research interns with the Project on US Leadership in Development.