Visitors to Afghanistan today might see a visible sign of the nation’s progress toward gender equality – women walking to university.  While women were not allowed to attend university under the Taliban, today around 26,000 women participate in higher education. However, despite significant improvements in the past decade, critical challenges still impact Afghan women’s ability to fully participate in society. Lack of female empowerment is still a barrier to sustainable development in Afghan society, economy, and governance.

An upcoming opportunity to discuss further developments will be the Brussels Conference on Afghanistan, which will be co-hosted by the Afghan government and the European Union in October. This conference will be a chance for the Afghan government to share their vision, establish plans for the future, and discuss how the international community can help. To achieve the goal of equal access for women, Afghan leadership will need to first understand the status quo of women in Afghanistan and consider two key hindrances to gender equality. First, female government officials are figureheads instead of agents of change. Second, there is an empowerment gap between those women sitting in governmental offices and the majority that is still constrained by traditional conservatism. After looking at these challenges, stakeholders must decide what opportunities lie ahead? What else can be done to advance women’s integration and recognition?

Since 2014, President Ashraf Ghani has displayed remarkable leadership on promoting gender quality and ensuring parity in governance. He views Afghan girls as the “future Afghan leaders” and has raised awareness to the fact that “investment on women have a sustainable impact.” This philosophy is reinforced in Ghani’s efforts to integrate more women into the Afghan government by continuing to support a constitutional quota that establishes that 27 percent of seats in the national parliament and 20 percent of seats in provincial councils must be filled by women.  Today, women make up 28 percent of the Afghan parliament- higher than the percentage of women in the U.S. Congress (15.2 percent) and the UK Parliament (19.7 percent). This is a seismic shift from the oppressive regime under the Taliban and today women also lead four key ministries, are ambassadors to three countries, and hold five deputy ministerial positions.

However, while women do have a seat at the governance table, they are much like the children at the dinner tables of yesterday: seen and not heard. This is largely due to the conservative mindset that still characterizes the Afghan society. Females are still excluded from the Supreme Court, and their contribution at the High Peace Council, the governmental branch in charge of demobilizing armed groups and leading negotiations, has been – not by their choice – minimal. Afghan women have repeatedly asked for the international community to pressure the government into including more than just nine women (13 percent of total seats) in the High Peace Council. In 2015 at “one of the most significant post-conflict peace talks…not a single representative was a woman.” Only a few women have participated in negotiations and dialogues, but always with limited scope of influence. The successful story of Afghan Parliament member Shukria Barakzai and her work in the Oslo dialogues with the Taliban in June 2015 is the exception rather than the rule. 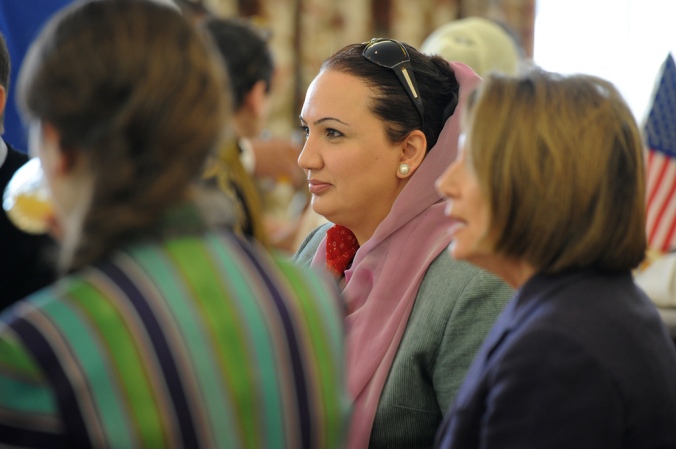 Shukria Barakzai, a member of the Afghan Parliament attending an event at the U.S. Embassy in Kabul in March 2011. Photo courtesy of Flickr user Nancy Pelosi, under a Creative Commons Attribution 2.0 Generic License.

Another problem is societal stratification among women: females who work in government do not typically reflect the life of the average Afghan woman, who still “face[s] discrimination, violence, and human rights violations.”  In 2015, there was a 37 percent increase in violence against women. The tragic example of Malikzada Farkhunda, a 27-year-old woman who was lynched because of a false accusation that she burnt pages from the Quran, puts a face to this reality. And this was not an isolated case, as millions of young girls do not attend school because of insecurity and restrictive social norms. Today, only 12 percent of women ages 15 and older can read and write, compared to 39 percent of males.

Even the scheduling of the Brussels Conference on Afghanistan reflects the low priority both Afghanistan and the international community give to the issue of gender parity. The women’s empowerment session will only be a breakout side event instead of being included as a topic for the main session or mainstreamed across all sessions. Further women’s empowerment relies heavily on the continued investment in education, which will increase women’s employability. This conference should therefore address how the Afghan government can take ownership of projects implemented by the international community, such as girls’ education, which is largely financed by the U.S. Agency for International Development (USAID). As donors begin to reduce or cut funds, Afghans will need to find a more sustainable approach. The Afghan government should therefore look for investors that can support their long-term educational programs through public-private partnerships.

As Afghans look towards a society with more equitable gender opportunities, they must first acknowledge and change the embedded patriarchal attitudes that have created the society in which women face crushing oppression. With regards to the conservative mindset in the society, perhaps Afghanistan can learn from the successful example of radio shows in Nigeria. While Nigerian society still battles patriarchal attitudes and a resistance to western education by actors such as Boko Haram, male leadership within Nigeria’s Muslim community has boldly spoken out for the right of access to education. As part of a small project sponsored by the United Kingdom through the International Civil Society Network (ICAN), a U.S.-based NGO, 15 radio episodes were broadcast at the Radio Nigeria Peace FM Maiduguri to counter Boko Haram’s narrative. As a result, the endemic apathy to western education in the Kanuri and Hausa communities was reduced and the enrolment rate in primary public schools increase by 40 percent for boys and girls. Given the incredible results of this radio show, a similar project could be implemented in different villages around Afghanistan, where the role of women in society would be discussed by Islamic scholars and male leaders.

Finally, it is important to reach out to rural families to participate in educational workshops about women’s rights, so that the mindset of rural populations begins shifting. Women for Women International, a NGO based in Washington, DC, for example, conducts on-the-ground workshops for male leaders in rural areas in Afghanistan to understand the role and rights of women.

The expectation of the international community is that having some females in power will change the reality for all women in Afghanistan, but that is an unrealistic expectation to place on women who are to be “seen and not heard.” For women in power to have the capability to change government and society, they must have a voice that is invited, welcomed, heard and then acknowledged in policy. For the average Afghan woman, the society’s conservative mindset still hinders her opportunities. Building effective inclusion will require more efforts to expand programs to rural areas and change the culture towards receptiveness to female leaders’ projects and opinions.

2 thoughts on “Women in Afghanistan: To Be Seen But Not Heard”