On March 11, 2016, the Special Inspector General for Afghanistan Reconstruction (SIGAR) John F. Sopko released a report reviewing 45 Department of Defense (DOD) reconstruction projects in Afghanistan. Of the 45 projects, 28 did not meet structural contract requirements or technical specifications, 16 were structurally deficient to the point that they were considered unsafe for use, and 7 of the 15 completed projects had never been used. According to Sopko, the projects suffered from inadequate contractors, project management and oversight; and faulty building materials. To limit deficient projects, Sopko suggested the DOD improve its project planning and design procedures, hire contractors who are qualified and capable of complying with construction requirements, and conduct adequate oversight to guarantee that projects are built to protocol and contractors are held accountable.

Between Sopko’s report and the allocation of U.S. reconstruction funds in Afghanistan, there appears to be an expertise, administration, and funding gap that is preventing the United States from establishing sustainable infrastructure projects in Afghanistan. In the field of international development, this is a common challenge, and more agencies are turning to public-private partnerships (PPPs) to address it. Inspired by PPPs in international development, this blog presents a new model that partners the public and private sectors with the military. This article will refer to this model as Public-Private-Military Partnerships (PPMPs). Though they may face challenges in attracting private investors, working with low starting budgets, and addressing anti-Western and anti-military perceptions, PPMPs can combine the groups’ comparative advantages to fill the knowledge and funding gap in the United States’ Afghanistan reconstruction projects. They can also further connect the military to global development for better military assistance in conflict areas and help conflict and post-conflict areas to pursue global development and sustainability goals. 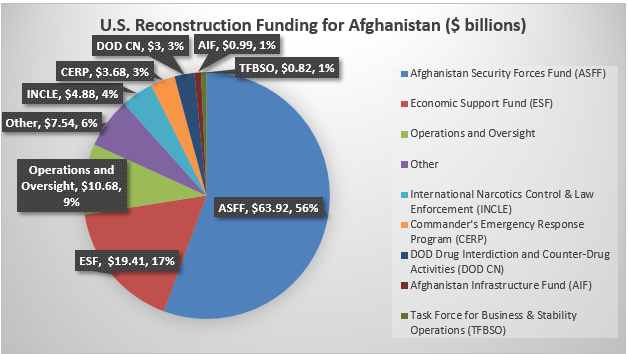 This graph is an original creation of the author, Jackson Celestin, based on data from the July 30, 2016 SIGAR Quarterly Report to Congress.