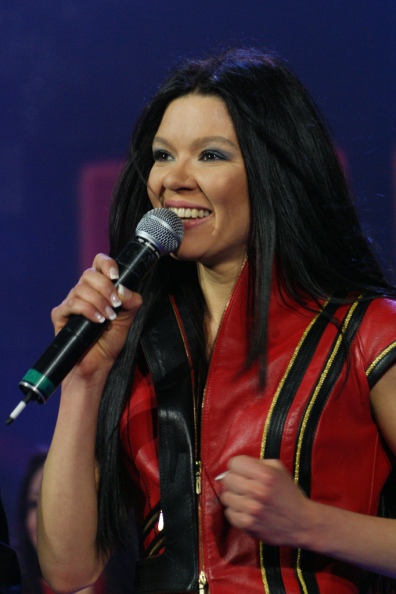 Ruslana spoke at CSIS on September 10

Ruslana became a prominent figure in the Euromaidan movement through her nightly performances on the front lines of the protests. She currently leads efforts to support internally displaced persons from Crimea and the Donbas and performs for Ukrainian troops in Eastern Ukraine. In January 2014, Ruslana testified at the European Union’s European Economic and Social Committee (EESC), which contributed to a resolution in support of Ukrainian civil society. Ruslana has traveled throughout Europe to increase international support and awareness of events in Ukraine. She previously served as a Member of Parliament for the Our Ukraine party from 2006-2007 and was actively engaged in the 2004 Orange Revolution.

Ruslana has won several awards in recognition of her leadership and bravery, including the Secretary of State’s International Women of Courage Award and the Atlantic Council’s 2014 Distinguished Humanitarian Leadership Award. Ruslana was also named Forbes Magazine’s one of the 10 most influential women in 2013, the UNICEF Goodwill Ambassador in Ukraine to combat human trafficking, and the Winner of the 2004 Eurovision Song Contest with her song, “Wild Dances.” On September 9, 2014 Ruslana received the International Republican Institute’s Freedom Award, established in 1995 to honor individuals who have worked to advance freedom and democracy.

What were some highlights from the event, and how can we move forward?

Ruslana addressed the need for energy independence from Russia– Ukraine imported nearly 50% of its gas from Russia in 2013, which presents a key strategic challenge in the current conflict. As Ukraine struggles regain stability and order, Russia wields the ability to cut off the country’s gas supply (it did just that in both 2006 and 2009).   Ukraine’s current energy dependence provides Moscow a lever of influence to affect the social, economic, and political circumstance in Ukraine.

Ruslana also acknowledged the role mass media has played in driving forward the conflict in Ukraine.  Russian media has used fear and misinformation to influence domestic national opinion, but has also withheld or obscured information that contradicts the Moscow constructed narrative of the conflict. Lack of access to the MH-17 crash site provides a high profile example of Russian obstructionism and manipulation of information.

In addition, Ruslana called for increased partnership and cultural exchange. She said that western nations are “strong and free enough” to help stop the conflict in Ukraine, but it is important to make sure that policies and assistance align with the needs of those affected by the conflict. Ruslana emphasized that constructive engagement requires listening to the accounts of people on the ground, either by visiting them or providing them a platform to speak in Western nations.

Above all, Ruslana delivered an inspiring and repeated call for peace and unity. Despite the complex and dangerous conflict gripping her country, she remains hopeful and inspirational. She explained that ultimately Ukrainians and Russians want peace, and beseeched the international community to help propagate this understanding.

If you missed the event, you can watch the video here.